Boasting one of the greatest character arcs in modern television and literature, Jaime Lannister, the eldest son of Tywin and known throughout the realm as ‘Kingslayer’, began life in George RR Martin’s A song of Ice and Fire series as an antagonistic figure, but like most of Martin’s characters, has a change of heart within the middle of the series.

Without a doubt, book Jaime is my favourite character in the series, and Nikolaj Coster-Waldeau does an impeccable job bringing him to life, with a perfect look and masterful character acting. Until season 8 undoes everything in favour of a cinematic finish, of course.

This is a brief study in what makes him tick, how he turns from hate-able, snobby antagonist to a hero we can all get behind and empathise with. I will be discussing his character arc from both the show and the book, so if you would like to avoid spoilers, consider coming back after you have watched or read them.

Introduced in the very beginning, Jaime Lannister, the eldest son of Tywin and Joanna, twin brother of Cersei, older brother of Tyrion and member of the Kingsguard to his brother-in-law, Robert. He is introduced to the audience in awe, by watching members of the Stark family as he traipses into their keep, and we quickly learn that there is nothing he appears to value in this world, except his family. Too much, some might say.

Throughout the first season, he is caught sleeping with his sister, tries to kill a child, is generally disrespectful and insulting to everyone, attacks Ned, stabs his biggest fan in the eye, and continues to be smarmy and punch-able. This is all set in contrast to how many characters seem to hold in almost mythical reproach. He is seen as the quite-literal golden boy of the Lannister family, a warrior with marvelled combat skill, and a sinister story behind his most common moniker; Kingslayer.

It’s apparent from the get-go that he wears this reputation like armour. He is a man who is well aware that he can do what he wants, and anyone who tries to stop him are the ones who face the repercussions. He is face is fixed with a permanent smirk, and there’s a sing-song, taunting quality to everything he says, as if it’s always some underlying taunt, that cloaks the true danger of his character. He is brash, proud and bold, and loyal to those few he loves. He is despicable, and presented as a true antagonist to the Starks.

His true love for Cersei is not shown just yet, only animalistic lust, but he does have a soft spot for a few characters. Tywin, his steely father; sees Jaime as the true heir and deserving of the Lannister name, and Jaime is loyal to his bloodline, and eager to please his father. He is one of the only characters to show true affection to Tyrion, whom he dotes on. Tywin is not the only character he respects and admires however, the other being Ser Barristan Selmy, the Lord Commander of the Kingsguard, who he idolises as the best swordsman in the Seven Kingdoms, and whom he once squired for. Everyone else, is an obstacle or an enemy. 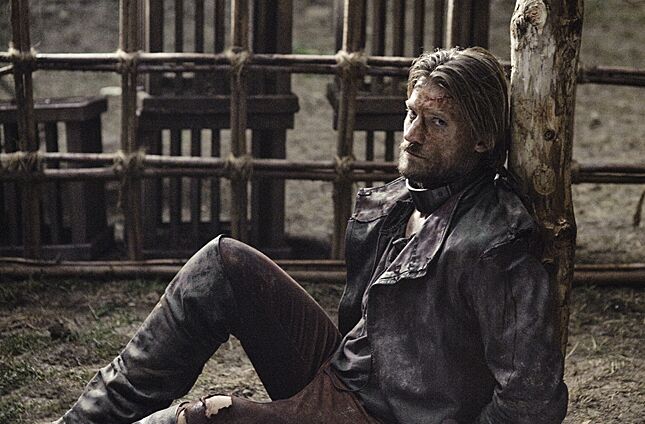 In season 2, things change. In an off-screen battle, Jaime is ambushed by Robb Stark, and imprisoned. As the days go by, he becomes dirty and damaged, but his pride is still there, and his arrogance, of course, apparent. He makes crude remarks to Catelyn, and openly mocks his captors. His role during this time is largely expanded upon in the TV adaption, as he hardly appears at all in the books, instead being a focal point for the other characters to decide upon.

On interesting invention in the show, is the introduction and death of Cleos Frey, half Lannister, half Frey, a squire who shares a cell with Jaime, who is cleary idolising Jaime, and the two share in similar experiences and bond. Then Jaime murders him. This scene is absent from the books, as Jaime would not harm any of his kin, half Frey or not, but it is telling to his character, the first instance we get of how desperate he is to return to Cersei, who we learn soon, is the only thing he loves in this world.

The big change, is how in the books, he and Catelyn have a more in depth conversation, bluntly revealing that he pushed Bran out of the window, but did not hire the assassin to kill him, and drunkenly swears an oath to her.

Up until Season 3, the audience has no real idea of the character underneath his posturing and ruthless determination, but we see small glimpses.

The first time we see his true character, is when he stops the Brave Companions from viciously raping Brienne, a character he had spent a large amount of time insulting, confronting and threatening, and in return he loses the one thing he believes defines him; his sword hand.

Even though up to this point, Jaime had been captured and bound in his own filth for months, he kept his smirk and quiet air of danger, from the sheer comfort of knowing he could probably kill anyone in his way once he was free, and that his family name hangs behind him at all times. When he is captured by Locke (In the show) or Vargo Hoat (In the books), it is made abruptly clear to him and the audience/reader that none of these things matter anymore. They are not interested in promises of gold or sapphires, they are sadists who just take what they have in front of them. Without his right hand or vague threats regarding his father, Jaime Lannister becomes just a man.

The true change, and one of the best scenes in the season, comes when they arrive at Harrenhal, with the newly appointed Roose Bolton securing the castle, and Jaime joins Brienne for a bath. 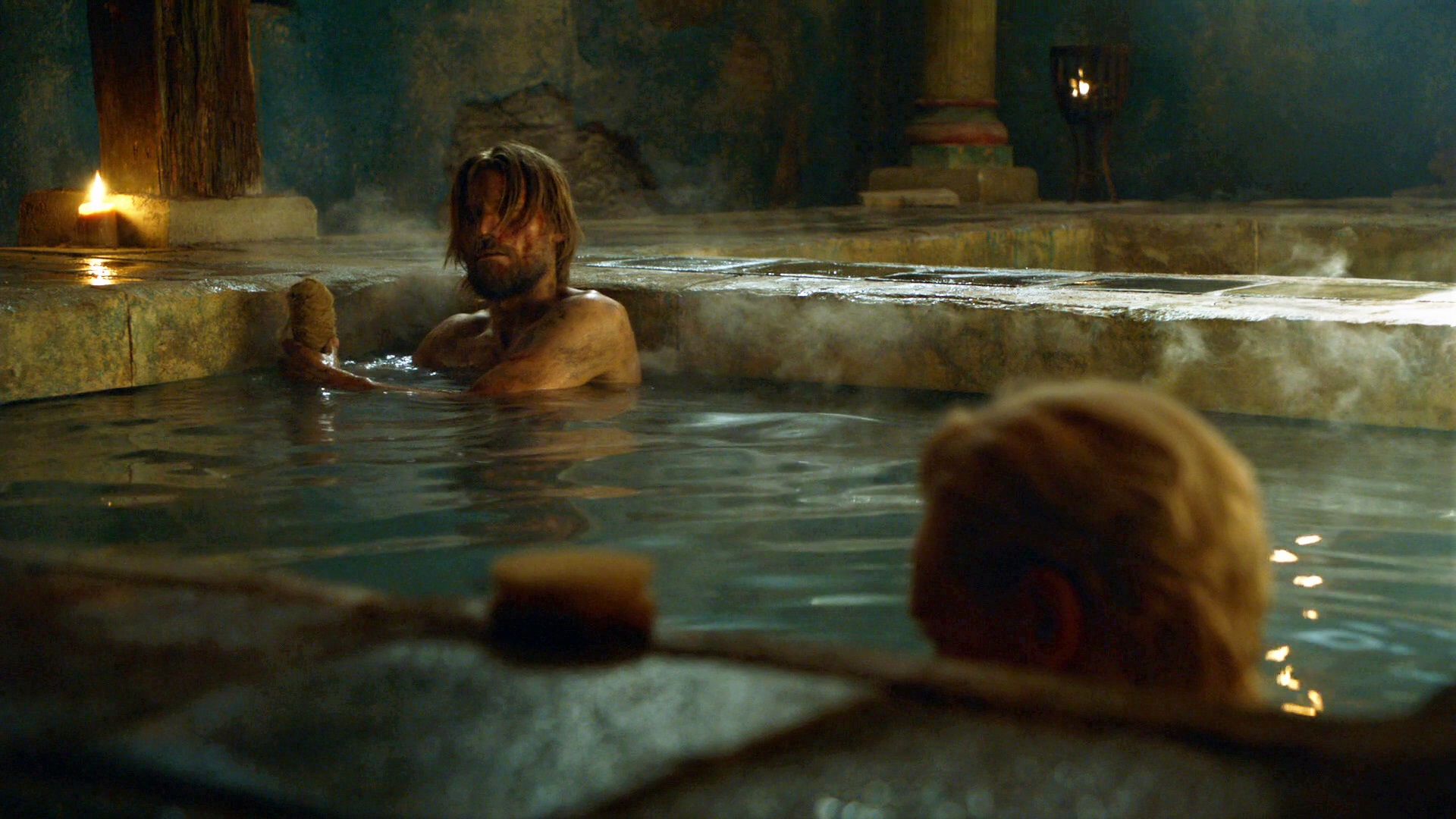 This scene plays mostly similar in the show to the book, with some small differences. The majority of how this one conversation plays out, is Jaime breaking down his walls; no longer a legend or a feared knight, just an amputee. He goads Brienne a little hear, in order to get a reaction out of her, as he always has been, insulting her honour and Renly simultaneously. However, unlike the man with his right hand, he takes it back and apologises, noting that it was force of habit to lash out, even at those who helped him, the reason being the same look Brienne gives him that everyone else has, since he killed the Mad King.

Nikolaj delivers a  fantastic speech, a worthy rival of Peter Dinklage’s trial speech from season 4, and reveals the truth behind his moniker; that he discarded his honour and oath to dot he right thing, something even Brienne would do. As he passes out, she calls out for help for the Kingslayer, where he tells her his name is Jaime, and as he is carried away, she remarks how he looks half a corpse and half a god. 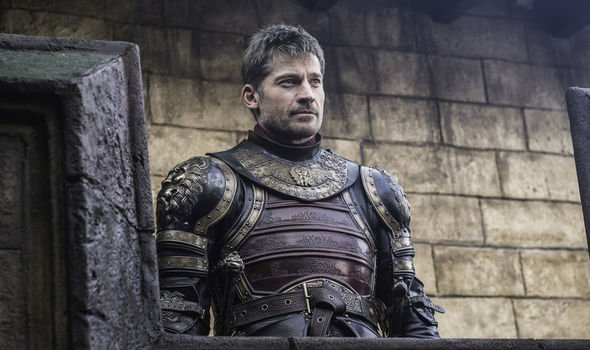 Jaime becomes more humble after this, now he knows what it is like to be a normal person, and he is aware enough to no longer keep his protective, compassionate side hidden, as evident when he returns to rescue Brienne from the bear.

It’s this change that gives him the chance to connect with his children, before they perish, and what compels him to save Tyrion, no matter what the cost, and eventually, leave the woman he loves more than anything to stop the Night King.

His level of trust and love for Brienne is so high after losing his hand, he appoints her with Valyrian steel, and bids her to continue her mission to protect the Stark girls, in honour of their deceased mother.

Family is everything to Jaime. He dotes and truly cares for Tyrion, engaging Ned Stark, the Hand of the King, in name of honour, and rescues him after his false imprisonment.

Cersei is his true love, and the only woman he has ever been with (Until the battle of Winterfell). He begins to see her deteriorate into a monster, but he cannot help but love her, and wants only to stay by her side.

Int he show, he is shown to truly care for his illegitimate, inbred children, mourning over each of their deaths, and showing genuine love for Myrcella. In the books, however, he was strictly sworn by Cersei to keep his distance, and grow no attachments. He is absent for Joffrey’s death, but does not mourn for him, and even thinks he deserved to die, and if he had the choice between his hand and his son, well, they could just make another son.

Brienne is the one person who listens to Jaime, and sees the man beneath the moniker,  and in turn he sees the person behind hers, Brienne the Beauty. The two argue and fight, but soon come to a mutual respect over each others honour, which develops into a genuine love. This is ultimately undone in the last few episodes of the show, but it was nice while it lasted.

Jaime was the child that disappointed Tywin the least, and thus his favourite, until he decides his pride is worth more than his title, and continues to be Lord Commander of the Kingsguard, effectively disowning himself from his father, who will never know how he sacrificed his reputation and future to save him.

What we can learn from Jaime

Jaimes arc follows him from villain, to anti-hero to hero, to anti-hero again. Everything about this man is complicated; his history, his perceptions and his attitude, it’s all intertwined within the perceptions and attitudes of the kings and lords around him. He was destined to fulfil the hardened, fear-mongering place that his father had intended for him, but he only wanted to be a hero like his idols. When that chance came, to say hundreds of thousands of lives, he was scorned and mocked for it, and wore the name ‘Kingslayer’ like armour.

His arc represents a rise and then a fall, by losing the three things that define his character up to this point, we see him struggle, and then adapt, coming out stronger, wiser, and as a better person.

His speech changes not only the characters perception of him, but the audience and reader too, so not only do we see him change presently after losing his hand, our perception of his past changes simultaneously. From then on, he is presented more heroically, always choosing to do the right thing, no matter what or who he must sacrifice from his life to do so. He might not be as dangerous with one hand as a fighter, but he chooses to be dangerous through his own strategies; intimidation and tactical thinking, and that’s why he is my favourite character from the whole saga.

Have a look at my features!